This is a decent guide with tons of information on various models. 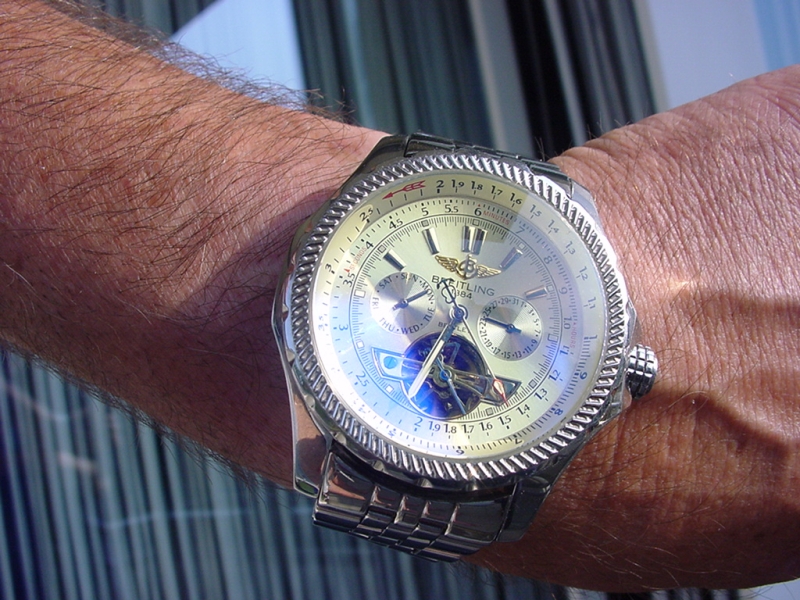 The above quotation is from the official Breitling web site. Whether the actual figure is 99%, 95% or any other number you want to make up, I don't know. What I do know that is every day I see many, many fake Breitlings appearing on the various internet auction sites being passed off as genuine. This site is an attempt on my part to reduce the chances of you being conned into buying an expensive fake Breitling.

If you've come here looking to discover where to buy the best Breitling replicas, you won't find it. Whilst the purpose of this site is not to lecture over the morality of the fake trade, it certainly is not here to promote it.

I became fascinated by replica watches during a visit to New York City in 2001. My guide, a native New Yorker, knew I liked watches, particularly Breitlings, and so took me down to Canal Street for a look around. At that time, it was wall to wall fake Rolex but tucked away in a corner I did find a fake Breitling which I purchased for the princely sum of $40.

This watch became a fun item to show my friends. Never once did I pretend it was anything but a fake but it looked good and was the catalyst for me wanting to buy the real thing more and more. I didn't have the money to walk into a jewelers and buy a new watch so I was forced to look on the second hand market. Whilst there was the odd internet retailer selling Breitlings, they were few and far between and so, like most people, I centered my search on eBay. This was when I began to realise just how dangerous it is buying on the internet due to the number of cheap fakes and near perfect replicas being sold.

"Knowledge is Power" as they say and so began my quest to learn as much as I could about the replicas being sold and how to spot them. I joined a couple of replica watch forums and read everything I could find until I felt I knew enough to be safe in my purchase. For some time now, I've been sharing my knowledge of fakes and replicas on a couple of Breitling forums, mainly

http://www.breitlingsource.com which I would recommend to anyone with an interest in Breitlings. It increasingly struck me that people considering buying a Breitling on the net had nowhere to look to check if their prospective purchase was likely to be genuine or not. Hopefully, this site will help to rectify matters.

This is an example of some of the tips:

[/b]The main thing to look out for is where the "p" in "superocean" meets the word "AUTOMATIC". On the replica, it sits above the "U" rather than the "A". However, some newer replicas have fixed this fault so if it passes this test, don't automatically assume that it's genuine. Also check the date wheel is not sunken (sitting lower against the dial) and the date font fills the date window. Harder to spot unless side by side is the size of the batons which are marginally slimmer on the genuine watch.

Here is the site -- >> http://f4buz.com/watches/breitling/fakes/fakes.html