What is the Geneva Seal?

What is the Geneva Seal?

As you all probably know...Patek Philippe and a few other brands are very proud to state that their watches contain the "Geneva Seal".

This is a quality seal awarded by an independent bureau in Geneva to watch movements submitted to it for inspection. To receive the seal, a movement must meet 12 criteria related to the quality of the movement’s finishing and the materials from which it is made. It must also have been manufactured in the canton of Geneva. The seal, which consists of the Geneva coat of arms, is stamped on the movement. The Geneva Seal is also called the “Geneva Hallmark” or the “Poinçon de Genève” (stamp of Geneva).

The following 12 conditions must be met in order for a watch to contain the seal:

1A. The workmanship of all the caliber's components, including those of additional mechanisms, must meet the requirements of the office for optional inspection of Geneva watches.

1B. Steel parts must have polished angles and their visible surfaces smoothed down. Screw heads have to be polished, with their slots and rims chamfered.

2. All movements must be provided on the train and escapement with ruby jewels having polished holes. On the bridge side, the jewels must be half frosted with polished sinks. The end stone for the center wheel on the base plate is not required.

3. The balance spring should be pinned up in a grooved plate with a stud having a rounded collar and cap. Mobile studs are allowed.

5. Regulating systems (balances) with variable radius of gyration are allowed provided they comply with criteria ONE (A) and ONE (B).

6. The wheels of the going train have to be chamfered above and below and have a polished sink. In wheels 0.15mm thick or less, a single chamfer is allowed on the bridge side.

7. In wheel assemblies, the pivot shanks and the faces of the pinion leaves have to be polished.

8. The escape wheel has to be light, not more than 0.16mm thick in large calibers and 0.13mm in calibers under 18mm. Its locking-faces have to be polished.

9. The angle traversed by the lever is to be limited by fixed banking walls to the exclusion of pins or studs.

11. The ratchet wheel and the crown wheel should be finished according to registered patterns.

12. Wire springs are not accepted.

Some examples:
On a Vacheron Constantin Malte "Grande Classique":

On a Patek Philippe: 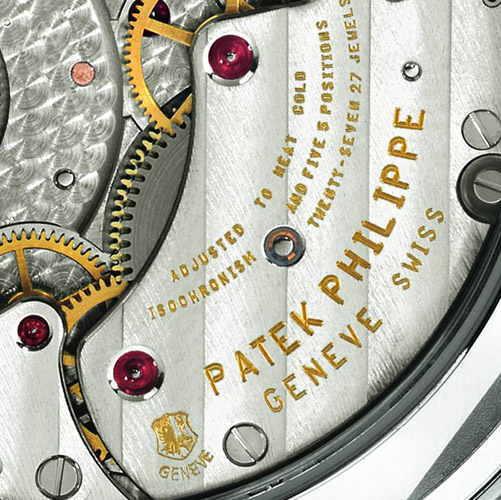 Now that's some interesting info. I wonder how many watch brands would qualify for this hallmark? Great post Mark!

Mark and Vito have been posting up a lot of information lately. Good to see the forum getting back on it's feet! GREAT WORK GUYS!

bodypeersur wrote:Now that's some interesting info. I wonder how many watch brands would qualify for this hallmark? Great post Mark!

Only a select few companies submit all their movements to obtain the Geneva Seal. Vacheron Constatin and Pateck Phillipe are two examples. Other watch manufacturers submit a single collection or a single movement like Chopard's L.U.C collection and the much publicized Cartier's Calibre 9453 MC which obtained its first Geneva Seal.